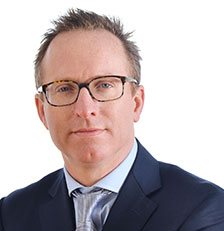 Michael Harney has been a Consultant Ear, Nose & Throat Surgeon in the Bon Secours Hospital in Cork, since 2009. He graduated from Trinity College Dublin Medical School with Honours in Surgery in 1994.

His ENT training extended over 11 years, from 1998-2009, obtaining his general ENT CCST (Certificate of Completion in Surgical Training) in Ireland in 2006. He undertook some further post-CCST training in paediatric ENT in Our Ladys Hospital for Sick Children in Dublin in 2006, and then completed a fellowship in rhinoplasty and reconstructive nasal surgery in Amsterdam in the Netherlands having being awarded a grant by The European Association of Facial Plastic Surgery (EAFPS) in 2007. This prestigious fellowship was under the tutelage of Professor Gilbert Nolste Trenite, an internationally renowned rhinoplasty surgeon and president of the European Association of Facial Plastic Surgery. He also trained in nasal reconstructive techniques post cancer excision under Hade Vuyk, author of the widely respected textbook ‘Facial Plastic and Reconstructive Surgery’. He then spent the next 2 years, from 2007-2009 in Monash Medical Centre in Melbourne, Australia. This wide ranging fellowship covered many areas of subspecialty ENT training, including head and neck oncology, sinus surgery, voice, paediatrics and otology. Mr Harney has been a consultant ENT surgeon in the Bon Secours Hospital in Cork since 2009. He also performs nasal reconstruction, septal and rhinoplasty surgery in the Bon Secours Hospital in Dublin. He is a member of the Irish Otolaryngological Society (IOS), the European Academy of Facial Plastic Surgery (EAFPS) and a Fellow of The Royal College of Surgeons of Ireland (RCSI). He currently lives in Kinsale with his wife, daughter and 2 dogs.